In 2016 the UK famously decided to leave the European Union, with the consequences of such a huge decision remaining relatively unknown. As Brexit negotiations continue into 2017 we are seeing some clouds of uncertainty across industries … including construction.

According to the Construction Products Association, there is mixed outlook for the next two years in construction due to Brexit.

Gas Engineer Magazine reports that construction is expected to remain broadly flat across 2017 and 2018 with a clear division between the fortunes of privately funded construction sectors such as commercial offices, and those unaffected by Brexit’s result such as infrastructure and educational facilities which are either publicly funded or in regulated sectors.

In areas of construction that are likely to be affected by the uncertainty of Brexit, investment has fallen sharply as opposed to the expectant growth of private house building. The unbalance of private funding versus public funding leaves certain sectors of the industry vulnerable to weakness.
This causes a lag between new contracts awarded and activity on the ground, in turn weakening the overall sector’s output from the second half of 2017 which can be linked to the Brexit result.

According to Economics Director Noble Francis, surveys across the industry do highlight that plenty of activity has sustained since Brexit but it is important to note that this is primarily based upon contracts signed in the 12-18 months before the referendum.

Looking to the future, projects in the pipeline means that the first half of 2017 will see the construction industry thrive but it is the second half of the year we need to be more cautious about.
Private house building has not been affected so far and has actually risen by two percent last year with anticipation to remain flat throughout the year ahead and eventually fall mildly in 2018 due to slower demand, economic decline, and real wage reductions.

It’ll be interesting to see what the upcoming months of post-Brexit negotiations deliver for all of the UK’s industries, especially construction, and how it’ll map out the future of Britain’s economy for all traders across the country.

No matter what the economic forecast, Complheat is a leading provider of Social and Private Housing heating installation, replacement, repair and maintenance services. We work closely with housing contractors across Merseyside and the North West to provide new-build or revived communities with gas, heating and plumbing.
Contact us for more information. 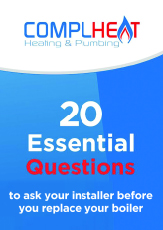